Menu
Visit our Christian Distinctiveness Page to see our school vision, our school values and our Bible narrative - The Wise and Foolish Builders!

This week in topic we have been making mini-beast gardens. The children have had lots of fun using a variety of  art materials and natural resources. They made mini-beasts, flowers and ponds. Have a look at our photos of their completed gardens.

This week in Kinder music the children have been thinking about feelings and how different pieces of music make them feel such as happy,scared or excited. As they listened carefully to a piece of classical music we could see from their facial expressions how they felt. One child said ' I imagined knights on horses and fighting dragons and dinosaurs, it was exciting.' Whilst others found it scary. They also played lots of different musical instruments in time to the beat.

We were very lucky to recently have a visit fromsome mini-beasts!  Katie's mummy (Wrens class) kindly brought in her giant millipede called Evie and a royal Python called Poffin. It was a great opportunity to ask questions and to hold some unusual mini-beasts. We were all very brave!
On Wednesday it was our launch day for our new topic on 'mini-beasts. We had lots of mini-beasts in our class that day such as; Butterflies, bumble bees, spiders. ladybirds and caterpillars too! We listened and moved to music like a mini-beast, created lots of fantastic art work before going on a mini-beast hunt. We had an amazing time at the allotment on our bug hunt and discovered that many of the bugs live under the logs were it is dark and damp. Afterwards we went to the pond, to check on the tadpoles and had an enjoyable time sat watching dragonflies dancing in the afternoon sun. ( please ignore the date on the photographs, I am unable to change it on my camera)

This week we went to the allotment on a mini beast hunt. We saw lots of butterflies,ants, woodlice and spiders. We discovered that most of them were hiding under the logs were it was cool and wet. It was good fun.

in maths we have been learning about the concept of size and how to measure using non-standard units. We thought of everyday words to describe size such as long and short, small and big and some of us even said big, bigger and biggest! We measured Giant footprints, beanstalks and leaves with paperclips, cubes and coins. Some of us even used rulers!

It has been an exciting start to the new term with our launch day. Everyone dressed up to the theme of growing or a fairy tale character.  All the children looked amazing! We talked about what grows and learnt a song about a farmer planting his seeds. Later in the day we made flowers, scarecrows and planted our own sunflower seeds, which we now have to look after.  In the afternoon we went to the allotment to see what was growing and we even had our snack down there too.
​In maths we have been ordering numbers using Numicon, number tiles and fishing for objects with numbers on in the water tray which we then had to order. Some children have even had a go at making their own 100 square.

As part of our world book day celebrations (be it abit late due to the snow closures) we worked with Kingfisher class . We listened to the story of the Gruffalo, acted it out and then created lots of artwork through painting and collaging and even story boarding on rolls of paper. It was fun working with the older children as they helped us. 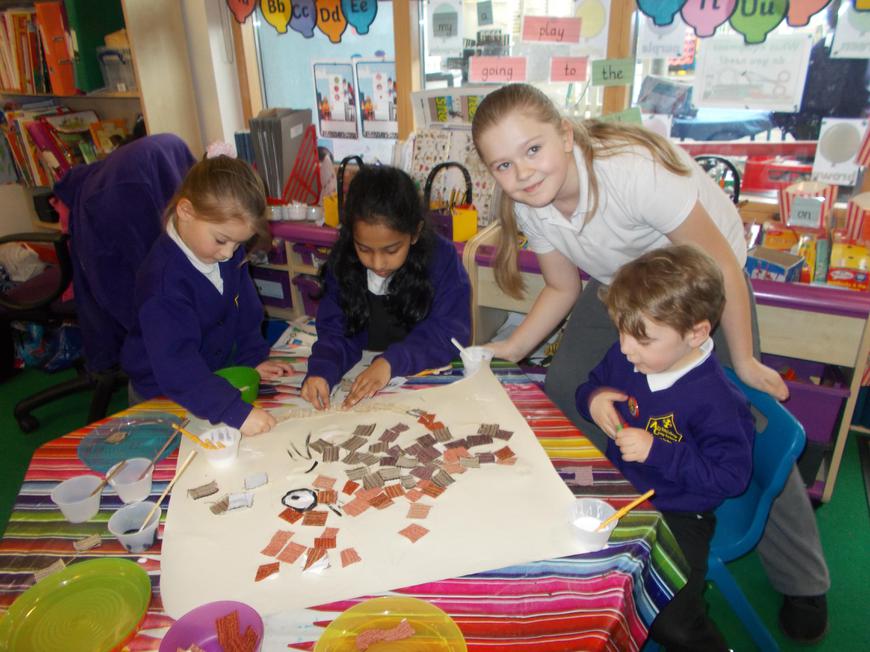 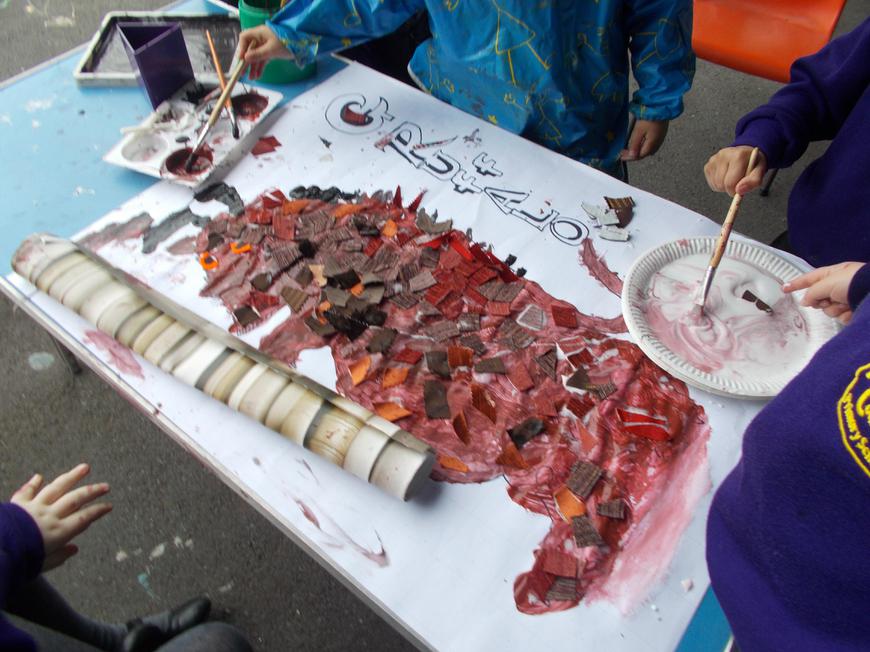 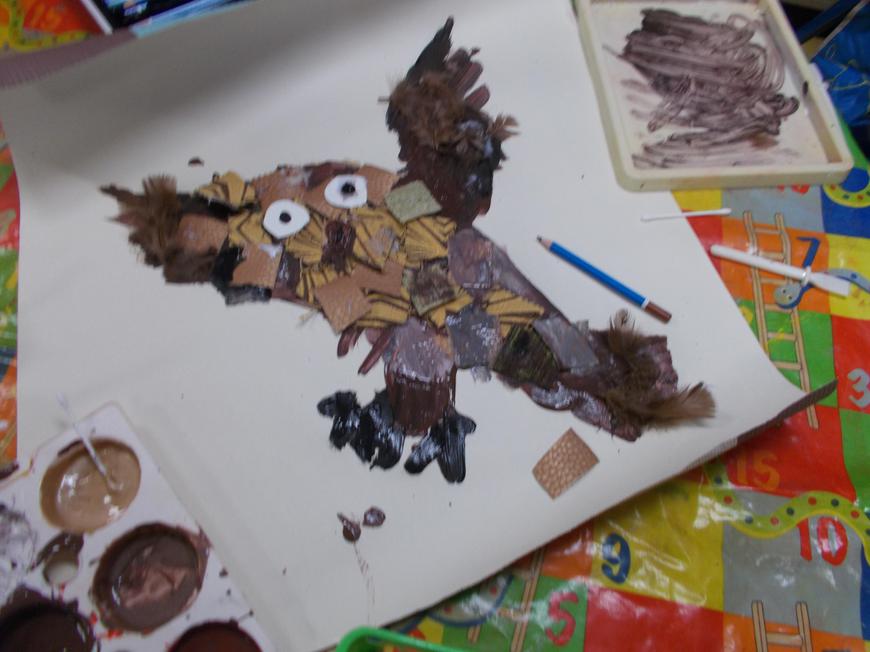 This week we have participated in sports relief and have played dodge ball with Wrens class as well as doing various  activities oiutside at lunchtime. We also do  ran laps around the sports court and most of us  managed to do  10 laps! We ll done to everyone . 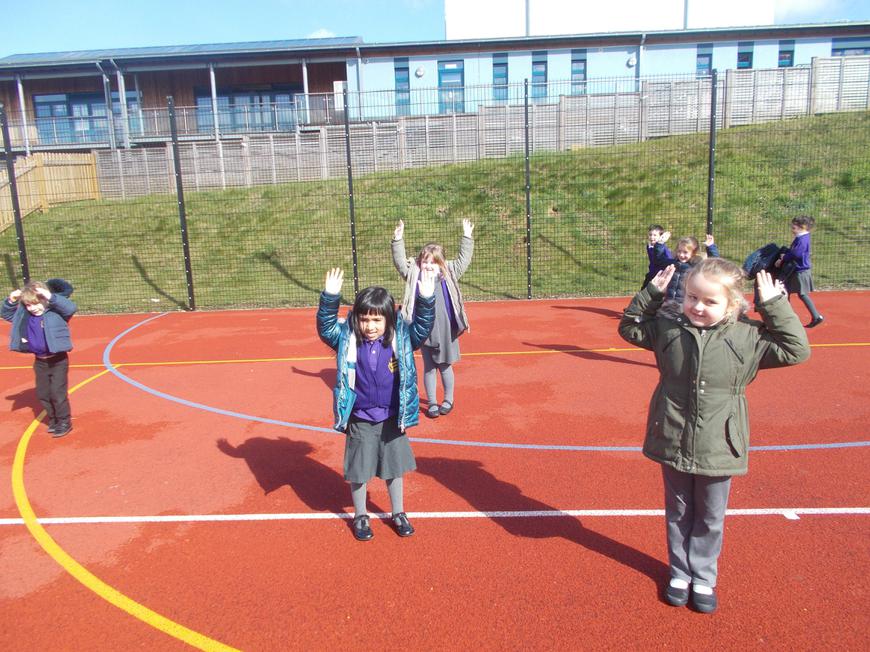 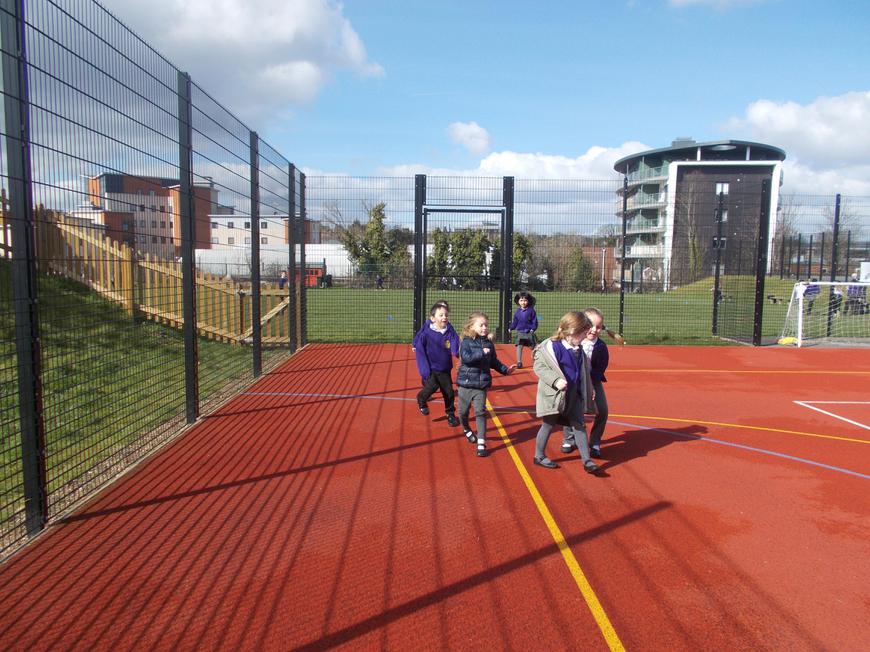 This week Jay class have had lots of fun exploring the ice and snow. After running around and picking up the snow they decided to get spades and brooms so that the could clear the snow. We did a science experiment too. The children filled a container with snow and brought it inside the classroom. We then observed how it changed in the warmth of our classroom. It melted into water we put it back outside over night. In the morning we observed that it turned into ice and decided that it was because it was so cold. 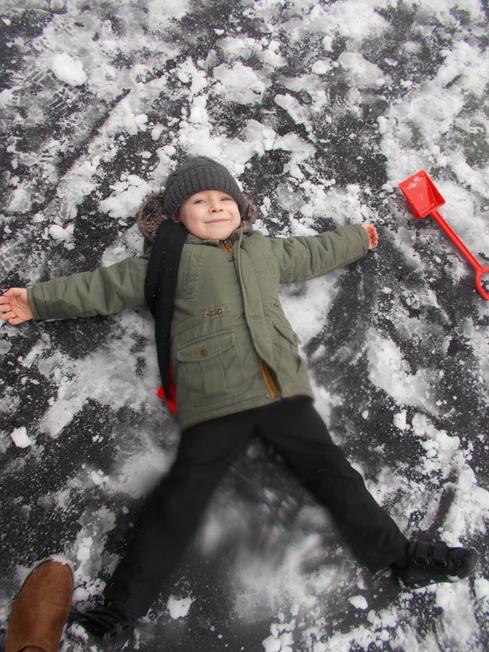 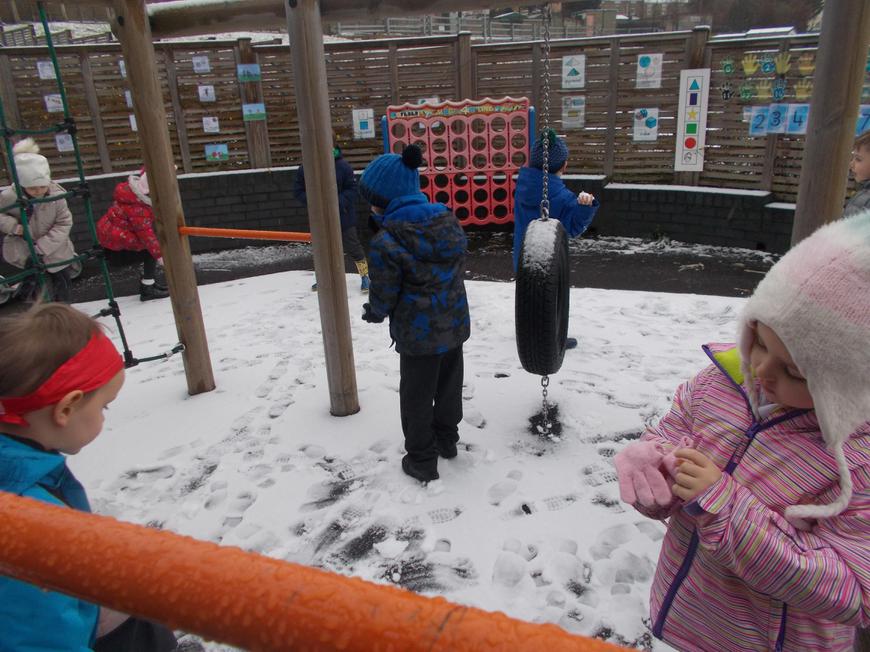 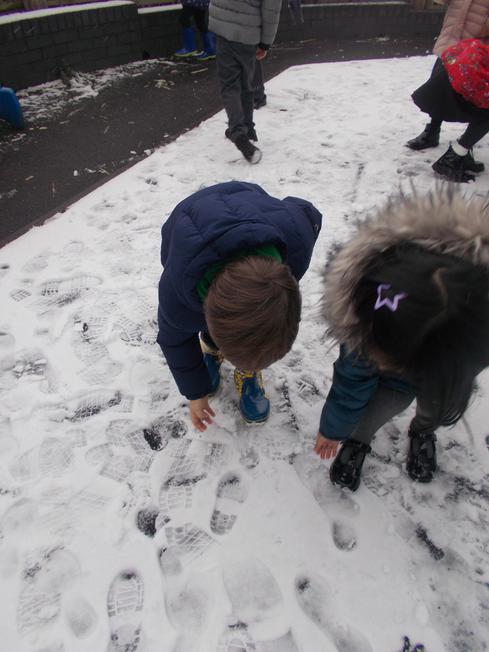 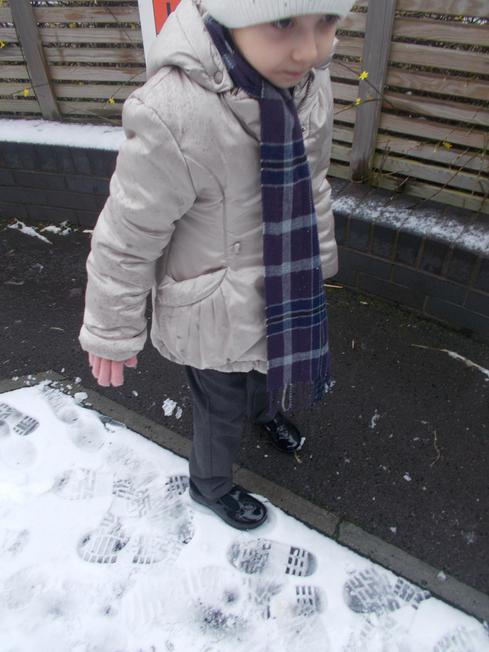 We have been creating our own weather mobiles and wind socks. We used a variety of materials such as card, tissue paper and wool. 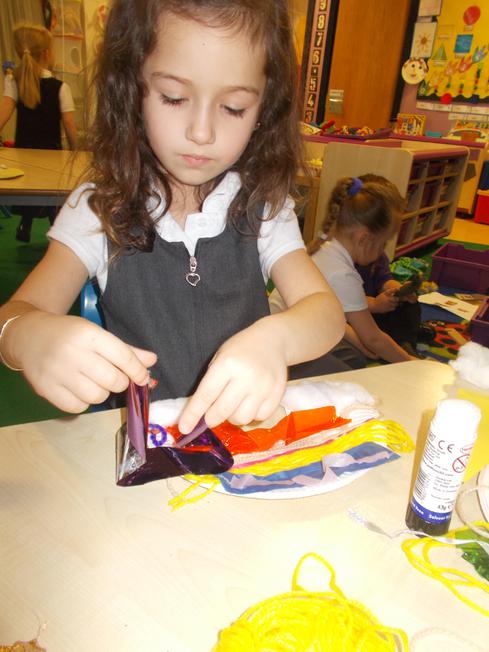 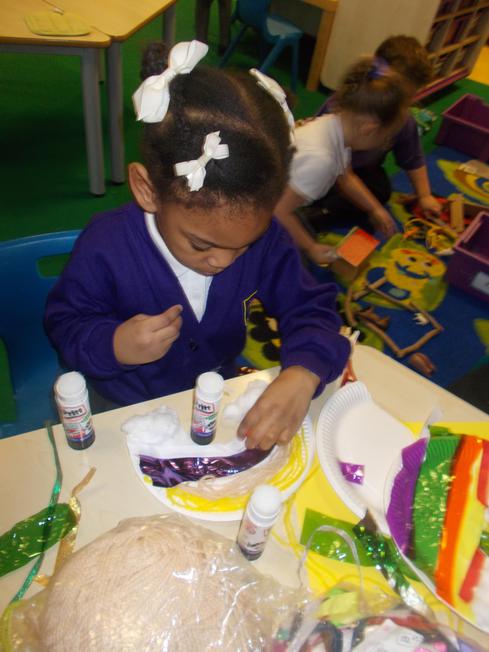 Today was Christmas Jumper Day, here are some of us in our lovely festive jumpers!

We are very proud of the Jays for taking part in our local MPS Christmas card competition. The children all tried very hard to draw their best designs for the cards. Helen Grant proudly visited our school today and presented the children with a certificate to thank them for taking part. Well done!
This term we have been exploring the topic of light and dark. Below are some photos of us in dark dens, acting out the story of 'Whatever Next!' and some of the work we have produced so far.