Design a leaflet giving advice from the government to someone sheltering during an air-raid. You will need to include information on this presentation and from the text 'What To Do In An Air-raid' (below).

Read the information then answer the questions

What to do during an air-raid

During the late 1930s, the British government began to prepare the civilian population for war. As well as the widely expected and feared bombing raids, it was also thought that poison gas might be used against civilians. Gas masks were issued in 1938 and over 44 million had been distributed by the outbreak of the Second World War in September 1939.

From 1 September 1939, 'Blackout' was enforced. Curtains, cardboard and paint were used to prevent light escaping from houses, offices, factories or shops, which might be used by enemy bombers to locate their targets.

The first air raid shelters were distributed in 1938. People without the outside space needed to put one up were encouraged to use communal shelters instead.

Public information films, leaflets and posters provided advice and guidance on how to cope in an air raid. These are some of the ways that the public could protect themselves – and others – during the Blitz.

Take care during an air-raid 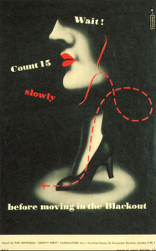 Blackout restrictions did not just cover the home. Street lighting and illuminated signs were extinguished and all vehicles had to put caps over their lights to dim them. In the early days of the war, people were forbidden even to carry around torches. The blackout caused a steady rise in accidents. A poll published in January 1940 found that since the previous September, one person in five had been injured in the blackout. 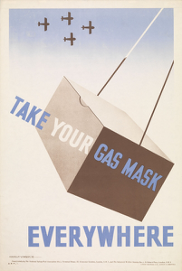 The public were urged by the government to carry their gas masks at all times, although it was not a legal requirement to do so. Initially, there were instances where workplaces sent home any employees who did not have their masks and some places of entertainment refused to allow people to enter without them. During the Phoney War period – from 3 September 1939 to 10 May 1940 – many people stopped carrying their gas masks. 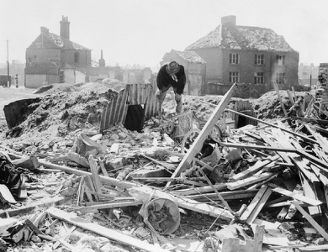 An Anderson shelter stands intact amongst a scene of debris in Norwich, c.1941

Anderson shelters – named after Sir John Anderson – consisted of two curved corrugated sheets of steel, bolted together at the top and sunk three feet into the ground, then covered with eighteen inches of earth. If constructed correctly, they could withstand the effects of a hundred-pound bomb falling six feet away. However, many Anderson shelters leaked, were cold, dark and cramped and amplified the noise of falling bombs.

If outside, find a communal shelter 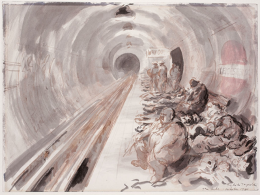 The Tube, October 1940, by Feliks Topolski (wash on paper)

The government initially tried to prevent London Underground stations being used as air raid shelters, fearing the development of a 'deep shelter mentality' and the potential disruption of the capital's transport network. However, Londoners persisted in using the Tube and eventually the government had to reconsider. Aldwych station was closed and converted into a permanent shelter. Improvements such as bunks, better lighting, washing and toilet facilities were made at other stations.

Shelter at home (even if you don't have a garden) 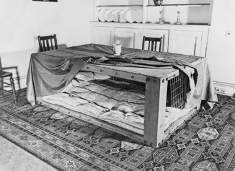 A Morrison shelter in a dining room, 1941

Morrison shelters – named after the Home Secretary Herbert Morrison – were produced from January 1941. They consisted of a rectangular steel and mesh cage which could accommodate two adults and two children. The Morrison was intended for use indoors so was suitable for those without gardens. Though more popular than Anderson shelters, they were less effective as they provided no lateral protection. They could also be used as a dining table during daytime.

Be prepared for a gas attack 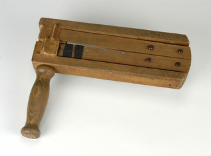 Air raid wardens were equipped with gas rattles and whistles to alert the public to a gas attack. Post boxes and lamp posts were painted with a substance which would reveal the presence of gas and identification and decontamination squads were set up. The public could attend lectures on the different types of gases that might be used and were advised to fill gaps in their windows and doors to prevent gas seeping in.

Read the text then answer the questions. Refer to the text in your answer. (Think – where in the text is the answer).

in the Second World War