Menu
We are closed to the majority of students...Please see updated information on our COVID-19 page under the Parents tab. 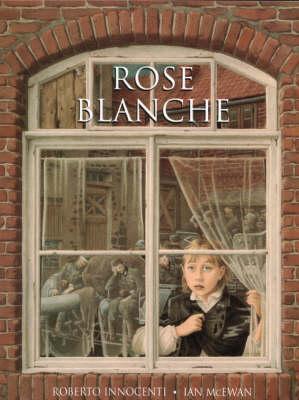 Look at the front cover of the book.

Now look at the first page in the book 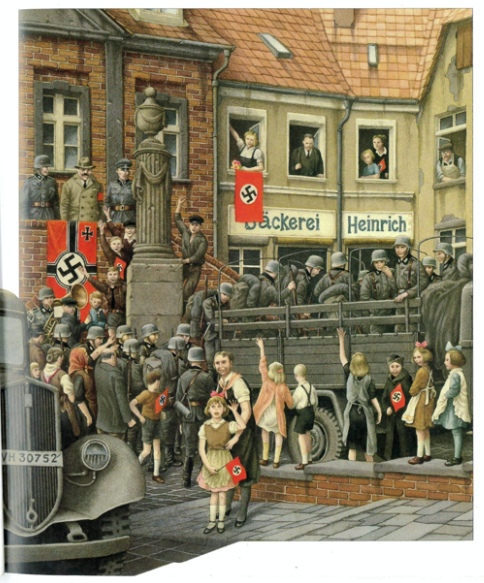 5. Where and when is the book set? How do you know?

7. How are cheerful people depicted in the illustration?

8. Where is the mayor? Why do you think he is there?

10. Winter was coming. What could this mean? (Hint: it doesn't just mean that the season of Winter is coming)

11. Look carefully at the colours the author has used; why has he chosen them?

Now that you have spent some time looking at the front cover and first page, what do you think this book will be about? Do you think you are going to enjoy this? 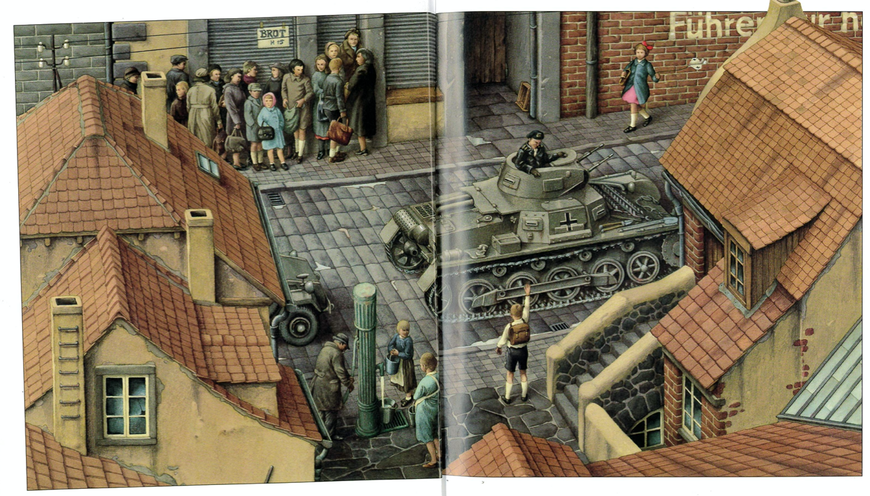 1. What is the overall mood of this page? Use clues from the text and also the picture to support your answer.

2. There were long queues outside the shops but no one grumbled. Why do you think that people didn’t complain?

3. Look at the boy waving at the tank: what might he be saying?

4. Read the paragraph that begins, ‘Then there were lorries grinding through …’

Make a note of interesting verbs and adjectives, for example grinding and narrow. Replace these words with synonyms (words that have the same or similar meaning). Here is an example ‘

‘…lorries grinding through the narrow streets…’

‘…lorries scraping through the tapered streets…’ 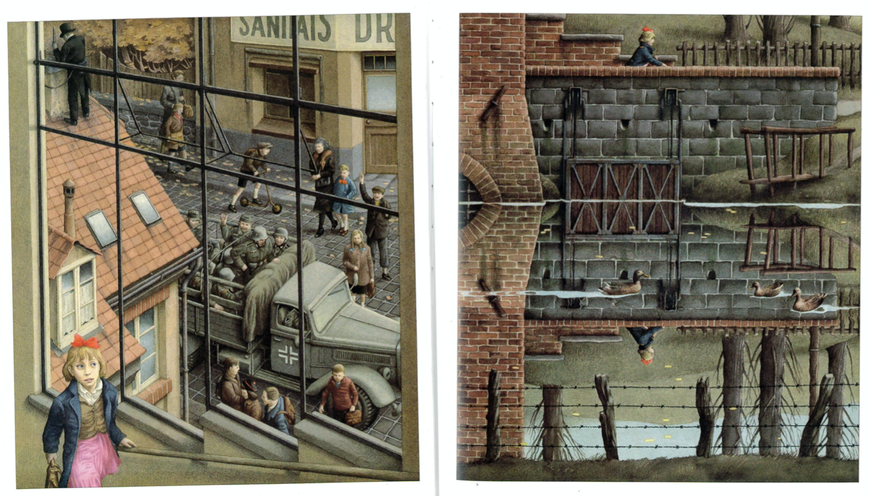 5. After the outbreak of war, what things stayed the same?

6. Spend a few moments looking carefully at the second picture: what do you notice? 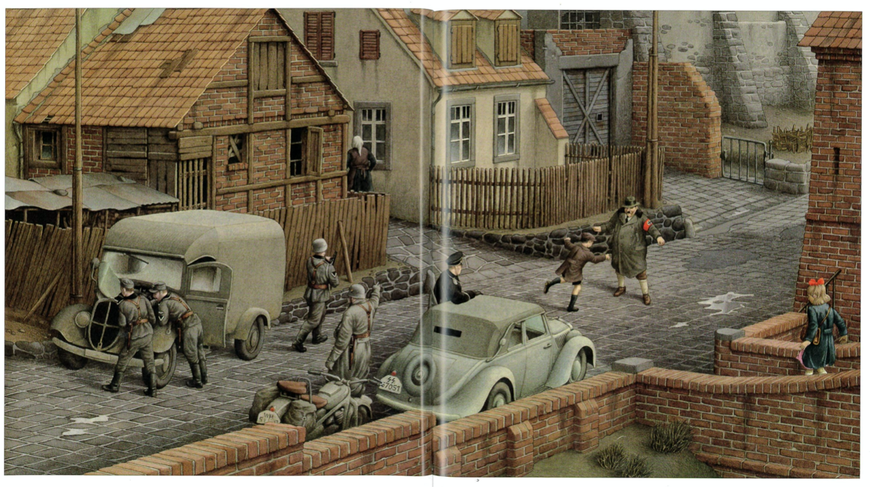 7. What can you see happening in the picture?

8. Why do you think the soldiers threatened to shoot the child?

9.Write speech / thought bubbles for the boy, the mayor and Rose Blanche.

10. Read the text and look carefully at the next two pictures then answer the following questions:

a) Why was the major immensely pleased with himself?

b) Who was the boy and why was he put in the lorry?

c) Who do you think the other people in the van are?

d) What does the illustrator and author want us to think about what has happened? Use evidence from the picture and the text to support your answer. 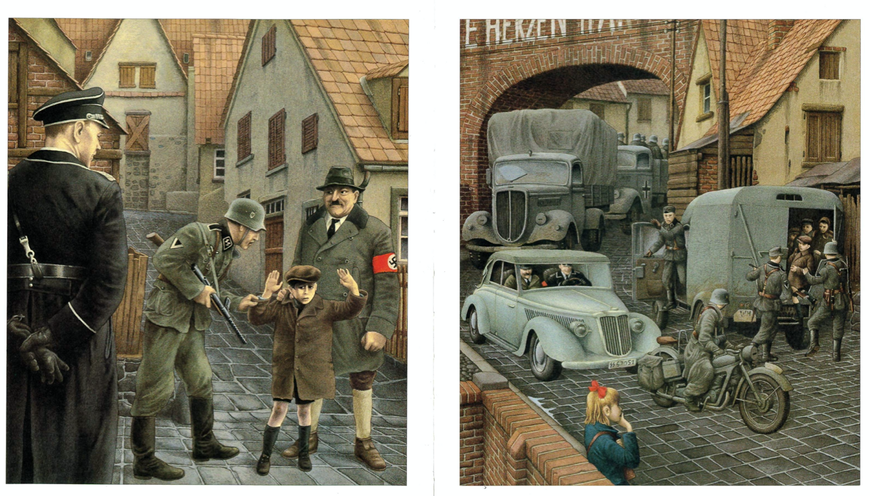 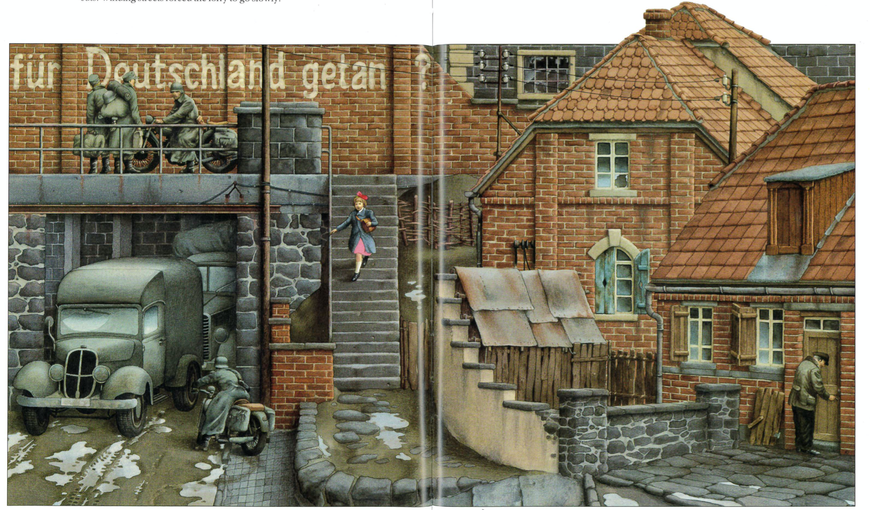 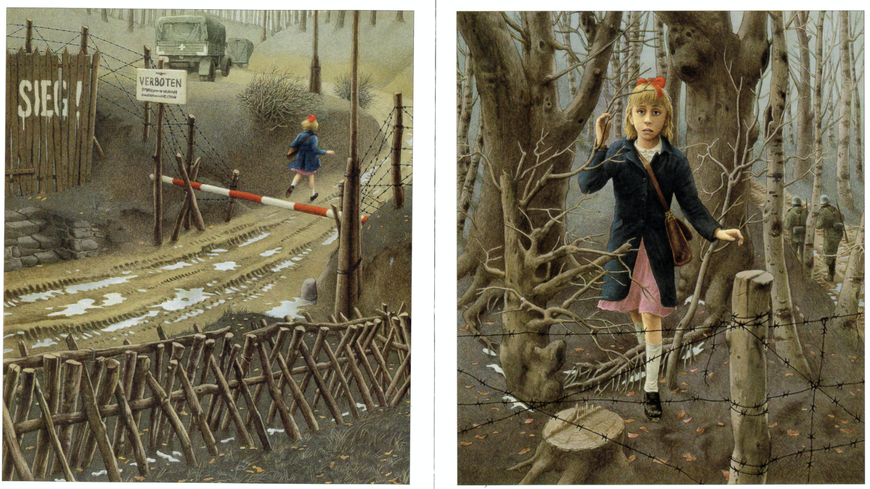 3. Find the words ‘Sieg’ and ‘Verboten’ in the picture. Research what they mean. What could these words suggest

4. What does the phrase ‘she was so tired she almost felt like giving up’ tell us about Rose’s character?

5. Look closely at the second illustration: what mood does the artist want to portray? How does he do this?

6. What do you think Rose Blanche can see ahead?

7. Before you read the text for this page, describe in your own words the scene that Rose Blanche came across. 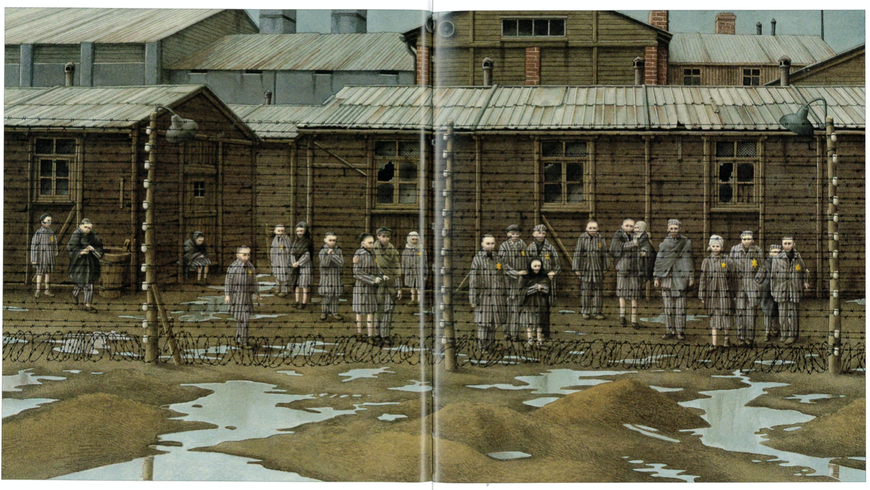 Now read the text and answer the next questions.

8. What does the phrase ‘their sad and hungry eyes followed her’ mean?

9. What does the phrase ‘the barbed wire moaned’ mean? What literary device has the author used?

10. How do these children feel? Use evidence from the text and the illustration to support your answer..

1. Sequence the events from the book in the correct order. 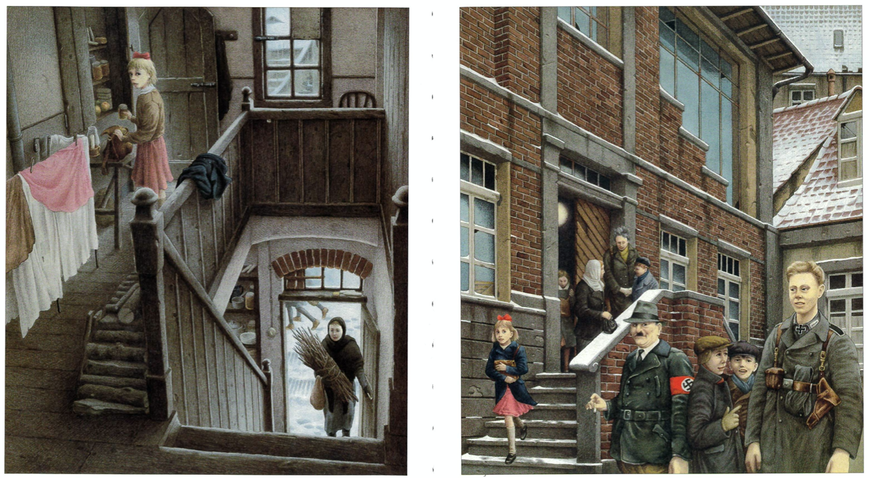 2. Why do you think Rose didn’t tell her mother?

3. What does the phrase ‘growing thinner’ mean?

b) Why was she clasping the bag?

c) What do you think was inside it?

5. If you were in Rose’s shoes, what would you do? Explain your reasoning. 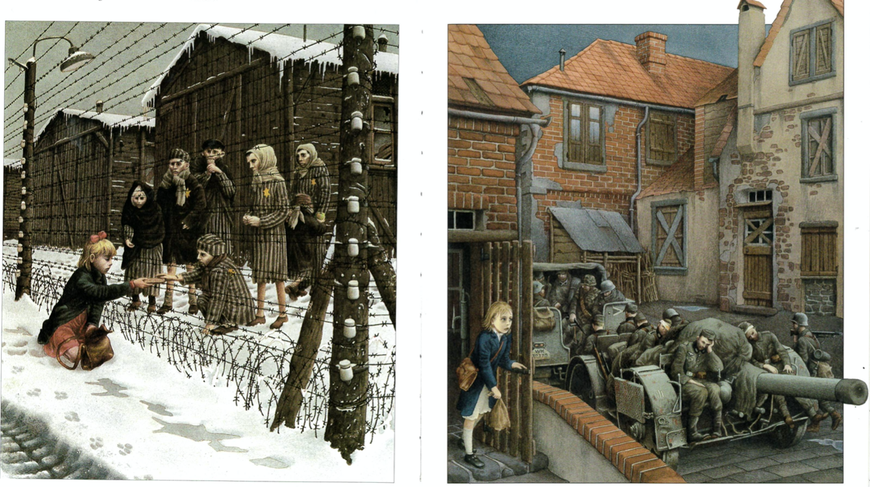 6. Do you think Rose has shared food with these children before? Explain your answer with reference to the text and

7. Draw and write a speech bubble for Rose Blanche and the child she is handing food to: what might they be saying?

8. Why have soldiers have come back to the town ‘exhausted, wounded, dispirited’.

9. Compare the second picture here with the first page in the book (Lesson 1 - not the front cover). Describe the

changes you see from that first image. 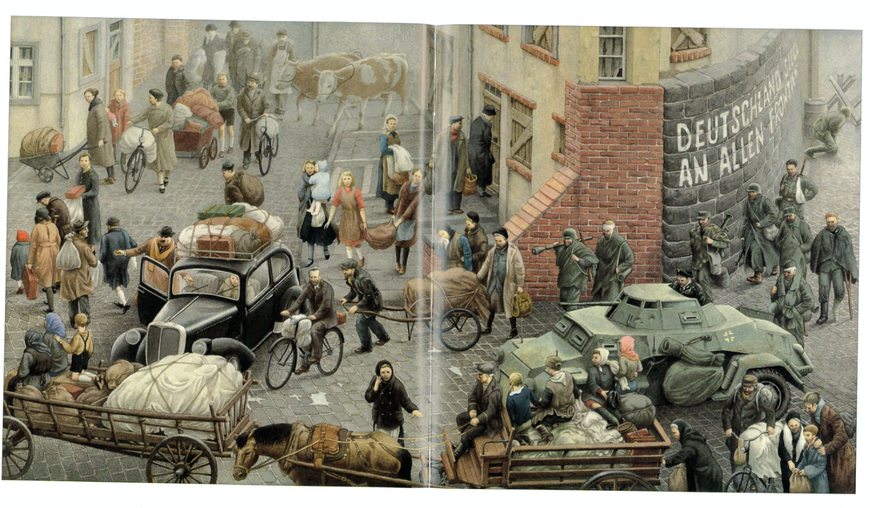 10. Why do you think the people (including the mayor) left?

11. The major removed his armband: think about what was on the armband. What does this suggest about how the

12. Which character in the illustration is Rose Blanche’s mother? How do you know?

13. Where do you think Rose Blanche is? Predict how you think the story will end tomorrow. 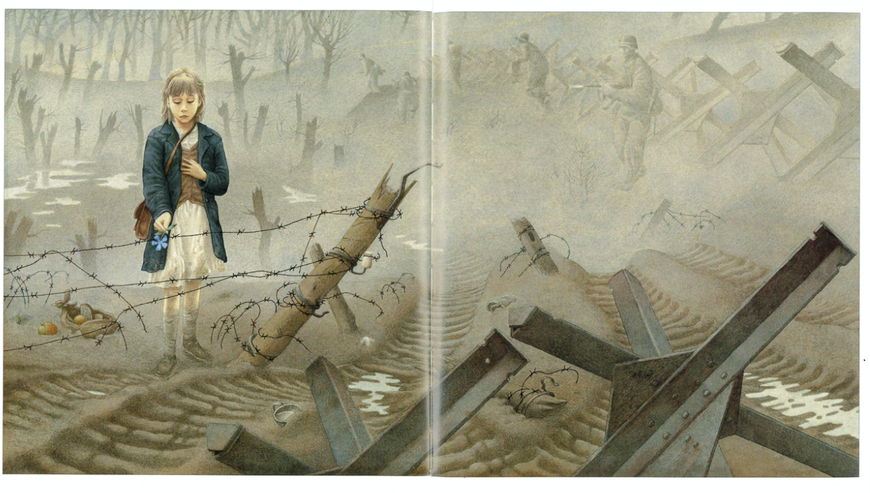 2. Describe how Rose Blanche has changed in this picture compared to the others pictures of her from pages 1 – 18.

3. Why to do think the illustrator has done this? 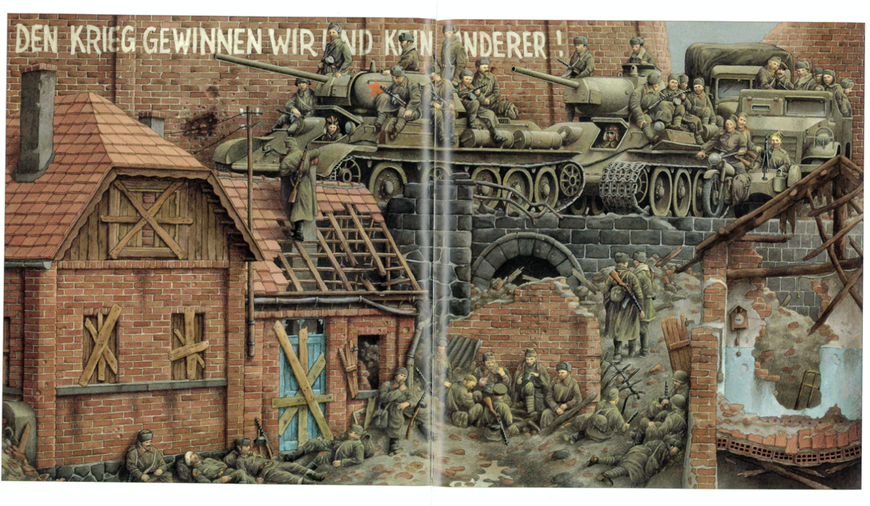 4. What do you think has happened? Use evidence from the text and the illustration to explain your answer. 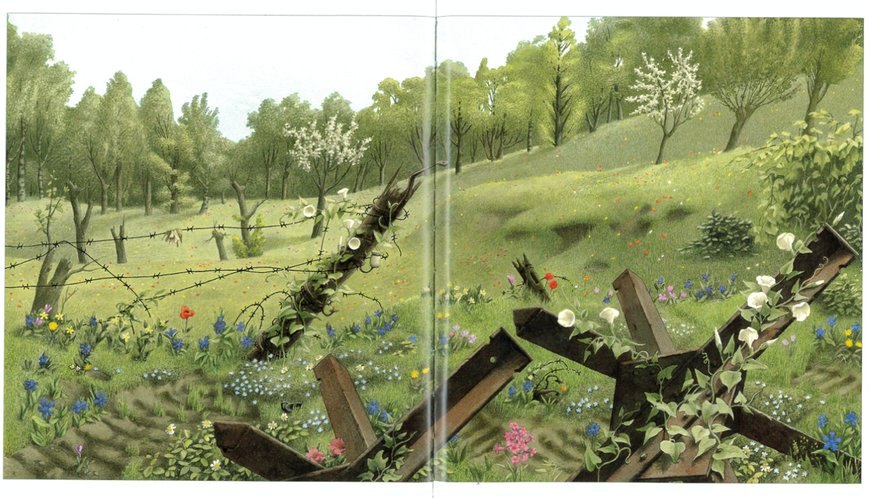 5. What happened to Rose Blanche? Who else may have been involved?

7.Compare the colour in the final illustration with all of the other illustrations in the book. Explain your ideas about the

8. The seasons (Winter and Spring) play an important role in the story: how?

9. Ask an adult to help you to research ‘Rose Blanche”. What does this mean to you? Why do you think the book has

10. Finally, write a book review of Rose Blanche. Remember to give a synopsis of the story (without giving away the

ending) and include some of the messages within. State whether you enjoyed it or not and why. Suggest who might