Science programmes of study in the National Curriculum are assigned to year groups. However, this is not compulsory and they must be covered before the end of the phase. Physics is not formally introduced until Key Stage 2. However, in Key Stage 1, children have opportunities to explore natural phenomena, such as shadows. In our Science Curriculum, the names of the science projects are matched to the National Curriculum aspects, for example, Living things and their habitats and Earth and space. However, in Key Stage 1, the aspect of Animals, including humans has been separated so that children study humans before expanding to explore animals.

The science projects are sequenced to develop both children’s substantive and declarative knowledge, and if possible, make meaningful links to other projects. For example, in Year 3, the projects Plants and Light are taught alongside the design and technology project Greenhouse and the art and design project Beautiful Botanicals. These links allow for children to embed their substantive knowledge in new and often real-life contexts.

The sequencing of projects ensures that children have the substantive knowledge and vocabulary to comprehend subsequent projects fully. Each project’s place in the year has also been carefully considered. For example, projects that involve growing plants or observing animals are positioned at a suitable time of year to give children the best possible opportunity to make first-hand observations. Within all the science projects, disciplinary knowledge is embedded within substantive content.

Since September 2021, Development Matters and Early Years Frameworks have incorporated and included Science in Understanding the World.  This involves guiding children to make sense of their physical world and their community. The frequency and range of children’s personal experiences increases their knowledge and sense of the world around them – from visiting parks, libraries and museums to meeting important members of society such as police officers, nurses and firefighters. In addition, listening to a broad selection of stories, non-fiction, rhymes and poems will foster their understanding of our culturally, socially, technologically and ecologically diverse world. As well as building important knowledge, this extends their familiarity with words that support understanding across domains. Enriching and widening children’s vocabulary will support later reading comprehension.

In Year 1, children start the autumn term with Everyday Materials, linking this learning to the design and technology project Shade and Shelter. In the Humans project, they learn about parts of the human body and those associated with the senses. In the spring project Seasonal changes, they learn broadly about seasonal changes linked to weather, living things and day length. They revisit some of this learning in the following summer term project Plants. They finish with the project Animals, linking back to their knowledge about body parts and senses and identifying commonalities.

In Year 2, children begin the autumn term with the project Humans, learning about the survival needs of humans, before expanding to study animals within their habitats in the project Living things and their habitats.

Building on learning from Year 1, children learn about the uses of materials in the spring project Uses of everyday materials and begin to understand changes of materials through simple physical manipulation, such as bending and twisting. The spring Plants project also explores survival, with children observing what plants need to grow and stay healthy. Finally, in the project Animals, children bring together learning from the autumn term, thinking about what animals need to survive.

Having learned about human body parts, the senses and survival in Key Stage 1, children now focus on specific body systems and nutrition in Key Stage 2. In the autumn term of Year 3, they learn about the skeletal and muscular system in the project Animals, including humans. This learning again links to other animals, with children identifying similarities and differences. Children also learn about healthy diets alongside the autumn term design and technology project Cook Well, Eatwell. In the spring term, properties of materials are revisited in the project Forces and magnets, with children identifying magnetic materials and learning about the non-contact force of magnetism. They also begin to learn about contact forces, investigating how things move over surfaces. Science learning about rocks and soils is delivered through the geography project Rocks, Relics and Rumbles. Children begin to link structure to function in the summer Plants project, identifying the plant parts associated with reproduction and water transport. Children finish the year with the project Light, where they are explicitly introduced to the subject of light, with children learning about shadows and reflections, revisiting language from Key Stage 1, including opaque and transparent.

In the autumn term of Year 4, children learn about the digestive system, again making comparisons to other animals, in the project Animals, including humans. The second autumn term project Sound introduces the concept of sound, with children identifying how sounds are made and travel. They learn and use new vocabulary, such as pitch and volume, and identify properties of materials associated with these concepts. In

the spring term project States of matter, children learn about solids, liquids and gases and their characteristics. They understand how temperature drives change of state and link this learning to the project Misty Mountain, Winding River, in which children learn about the water cycle. Up to this point, children have had many opportunities for grouping and sorting living things. In the spring project Living things and their habitats, children recognise this as ‘classification’ and explore classification keys. Finally, in the summer term, children study electricity by creating and recording simple circuits in the project Electricity. They also build on their knowledge of the properties of materials, identifying electrical conductors and insulators.

In the autumn term of Year 5, children broaden their knowledge of forces, including gravity and air and water resistance, in the project Forces. They revisit learning from design and technology projects, including Making it Move and Moving Mechanisms, to explore various mechanisms and their uses. Their knowledge of gravity supports the autumn term project Earth and space, so they can understand the forces that shape planets and our solar system. They also develop their understanding of day and night, first explored in the Year 1 project Seasonal changes. Having learned that animals and plants produce offspring in earlier projects and studied plant and animal life cycles in Sow, Grow and Farm, children now focus on the human life cycle and sexual reproduction in the spring term project Animals, including humans. In the summer term project Properties and

changes of materials, children revisit much of their prior learning about materials’ properties and learn new properties, including thermal conductivity and solubility. To this point, children have learned much about reversible changes, such as melting and freezing, but now extend their learning to irreversible changes, including chemical changes.

In Year 6, the final body system children learn about is the circulatory system and its roles in transporting water, nutrients and gases in the autumn term project Animals, including humans. Science learning about classification is delivered through the spring term geography project Frozen Kingdoms. In the spring term, children also build on their knowledge about electrical circuits from Year 4, now learning and recording standard symbols for circuit components and investigating the function of components and the effects of voltage on a circuit in the project Electricity. In the summer project Light, children recognise that light travels in straight lines from a source or reflector to the eye and explain the shape of shadows. Finally, in the project Evolution and inheritance, children learn about inheritance and understand why offspring are not identical to their parents. They also learn about natural selection and how this can lead to the evolution of a species. 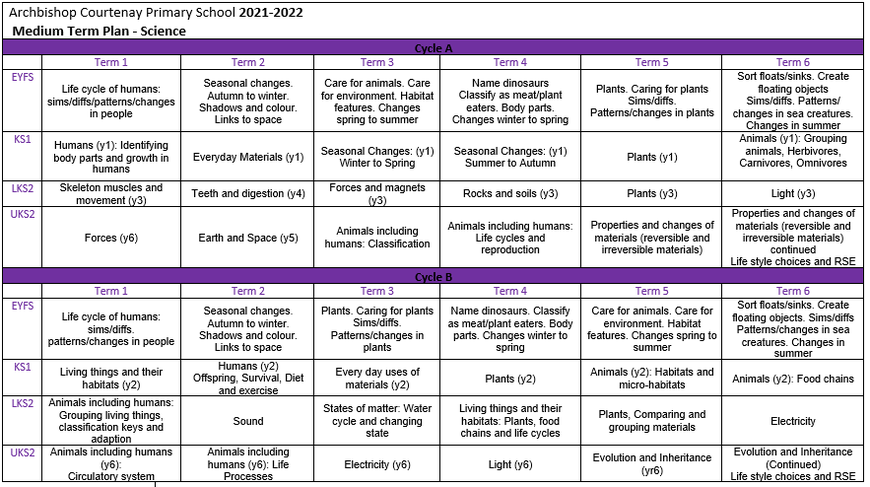